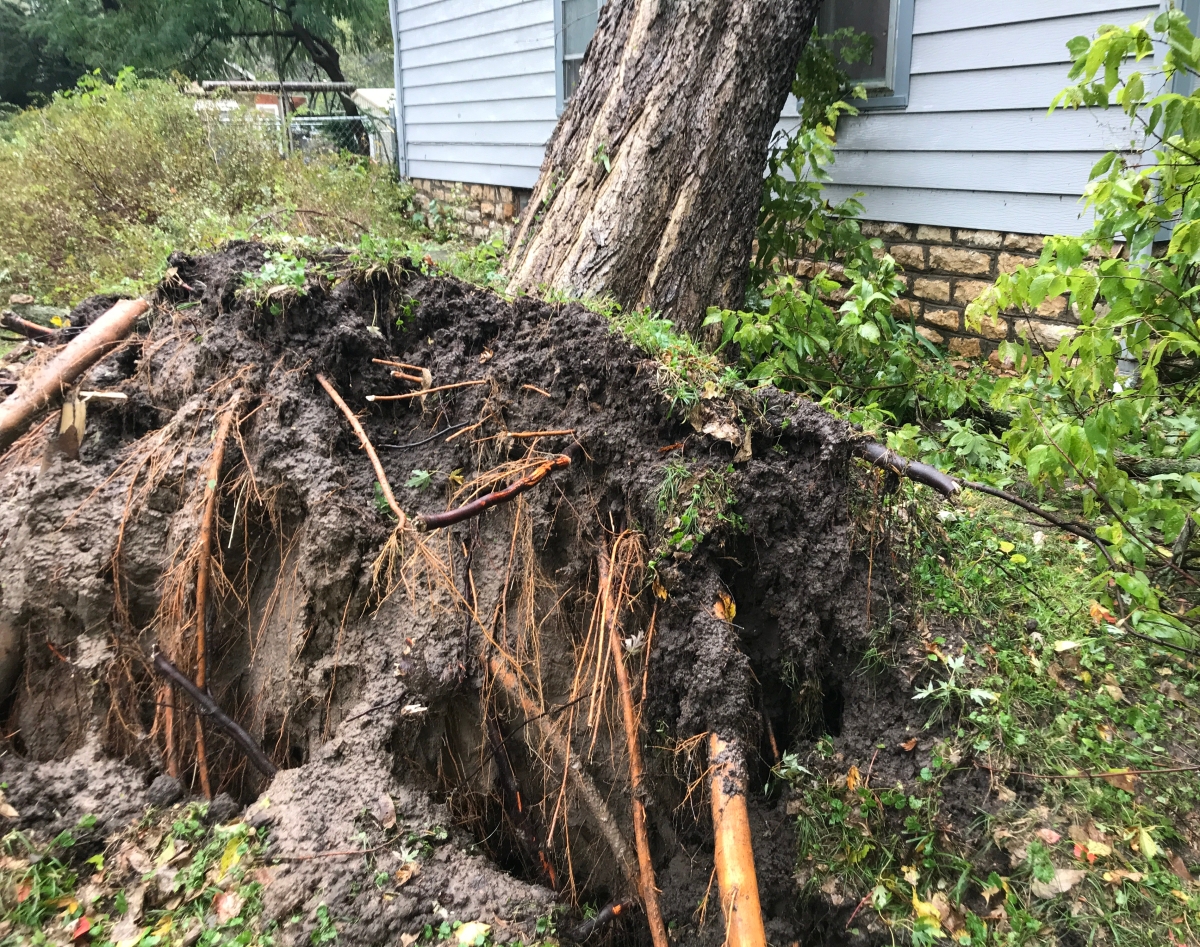 A year ago, we were in the path of a wet microburst resulting in a big, old hackberry tree uprooting and resting on our house.

This blog includes our initial reactions.

Here are my thoughts after a year has passed.

It actually took a while to have the experts settle on the type of storm we had.  They initially said we had straight-line winds, and later said it was a wet microburst.  Our neighbors quickly named it a microburst, and they were spot on.

What also seemed to take a while was getting the house repaired. I have no idea what is typical, as I hadn’t experienced working with a homeowners insurance claim of this proportion.  The tree was removed in less than a week and the insurance adjuster cut us a check to pay the tree service while sitting in his truck.  That’s a nice use of technology!  I didn’t know our mortgage company would also be involved in the repair process, but it made sense since they own it as well.  It just added another layer to get the house repaired.

But the house repair was a seven-months-long process.  Fortunately,  after the tree was removed we were able to return to live in it.

Although the restoration of the house took over half a year, we have an improved house! Some repairs we were needing to attend to were swept up in the restoration.  The tree falling onto our house left ripples in most of our ceilings in our house.  Some of our ceilings had decades of patching, but are now ripple and patch free.  Walls were impacted as well, so they are repaired and have new paint.  It’s quite the facelift inside! We now have a new roof, half of the house has new siding and guttering, and two badly needed new windows.   I quickly named our tree “The Giving Tree”.

Prior to the tree falling, I would comment to Ken I wanted a truckload of mulch for our yard. I asked the company who removed our tree to give us some mulch from our tree, and they delivered!  I wondered if we could find a place for all of this, but that was not a problem.  It did take us several weeks to disperse it, but it was fun!  A year later I am ready for more mulch, but not ready for another storm.

We both are now “jumpy” when we have storms with high winds.  About an hour prior to the storm I had taken a walk. There was thunder in the distance while I was walking, and I was aware a rainstorm was predicted. I don’t take walks when there’s thunder within my hearing. The strength of a storm is no longer theoretical to me.

Ironically, when this storm was beginning last year, I said how much I enjoyed the wind.  In minutes, the wind was blowing so fast the leaves were flying past our front window.  That was when we decided to move away from the windows. It has taken a while to not go to a fight, fight or freeze kind of place when having high winds now. 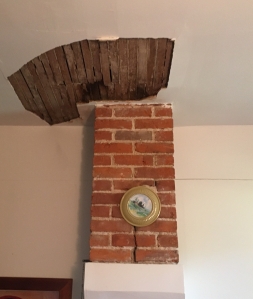 This incident gave me the opportunity to take stock about where my security lies.  When the tree was resting on our house, being inside of it felt risky, and unsure if it was safe to be inside the house.  When the tree was removed and the insurance adjuster said our house was safe to stay in again, we didn’t stay in our bedroom right away.  It had a nonfunctioning chimney for a long-ago wood stove that was cracked when the tree hit our house, with mortar falling out in places.  The plaster ceiling around it just fell off. We discovered the chimney on the roof was totally loosened and was easily dismantled.  Subsequently, we had no idea if the chimney was stable and didn’t want to find out while sleeping.  After a month of no movement of the chimney and internal repairs not happening soon, we returned to our bedroom.  (When repairs did happen, we requested they remove the chimney.  Our bedroom is small, and this gave us more space. The masons did a wonderful job of preserving the bricks so we now have bricks to use for other projects.)

I realized I had assumed our house was my safe haven.   I have preferred to live in homes with a basement to have a safe(r) place to go for a tornado.  But I didn’t have a plan for a tree uprooting and landing on the house. It made safety feel like an illusion, which indeed it is.  My feeling of security really rests within me and my version of God.  Ken and I were unscathed and in fact, benefited from the demise of our tree.  But the potential the tree could have landed on us was not lost on us.  Our wonderment and gratitude were, and are, vast.  Now, when I find myself worrying about the small stuff (it’s all small stuff, in the end) I remind myself about the tree, what a great outcome we had and where my trust truly lies.

I have wrapped up my gig in the legit work world and have dived into this gig of potentials called retirement. I was a social worker; finishing my career in the Lawrence Public Schools. Currently, I spend time hanging out with my husband, those two young adults I had the privilege of momming, and two grandchildren. I love connecting with my friends and talking about what’s important to us over a cup of local jo. You can find me outside taking walks, tending our wild yard, or inside cooking Gluten-free yummy food, knitting, crocheting, reading, and catching up with my large extended family. After exploring approaches to life, I have decided the only guide I need is Love. And that keeps me grinning. View all posts by Lorna

2 thoughts on “Our Giving Tree”

This site uses Akismet to reduce spam. Learn how your comment data is processed.